In a bid to attract investment into India’s food grain storage infrastructure from big corporate entities, the food ministry has approved a policy which encourages the private players to bid for construction of 249 state-of-art silos with close to 11 million tonne (MT) wheat storage capacity for the Food Corporation of India (FCI).

The silos will be built across 12 states, including Punjab, Haryana, Madhya Pradesh, Maharashtra, Haryana and Kerala, over the next four to five years through the public-private partnership (PPP) model with an estimated investment of Rs 9,200 crore.

The FCI will use the silos for storage of wheat through a lease of thirty years with private entities. As per the tender document, fixed storage charges to be paid by the FCI to private entities based on a per tonne per year basis are the bidding parameters. This fixed charge escalates by 70% of the wholesale price index and 30% of the consumer price index. 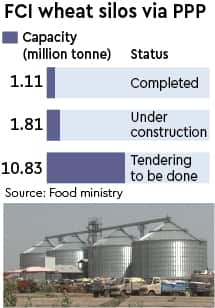 Sources told FE that ‘through bundling of projects’ the food ministry has removed an earlier clause which used to restrict large private players or consortium from participating in bidding for a number of projects for construction of silos.

Officials say that upper ceiling for bidding by any single entity or consortium for construction of silos was 15% of the locations or the storage capacity.

Based on the recommendation of a high-level committee for restructuring of FCI, chaired by former food minister Shanta Kumar, in 2014, an action plan for construction of 10 MT capacity wheat silos through private sector investment was approved by the food ministry in 2016.

For the first time, two rice silos with a combined storage capacity of 25,000 tonne are currently being built at Buxar and Kaimur in Bihar by private entities for FCI on a pilot basis.

FCI stores around 55 MT to 85 MT of rice and wheat at any given point of time. Silos ensure better preservation of food grains and enhances its shelf-life.

Samsung to invest Rs 1,588 crore in Tamil Nadu to set up new compressor plant for refrigerators